Alarm Clock is a fully-featured alarm clock for use with an AppIndicator implementation. It's easy to use yet powerful with support for multiple repeatable alarms, as well as snoozing and a flexible notification system.

After a long period of being unmaintained, I am thrilled to announce that alarm-clock has a new maintainer: @tatokis!

You may have noticed a recent burst of activity in the project, with lots of improvements, bug fixes, and even a new 0.4.1 release! All of these developments are thanks to @tatokis.

As the original creator of alarm-clock, it makes me very happy to hand over the maintainership to @tatokis. He has already made significant contributions to the code base, including porting the project to Gtk 3, GSettings, GtkApplication, GActions and a more modern CMake build system. All of these improvements should also enable alarm-clock-applet to be packaged in modern Linux distributions. I am confident that the project will thrive under his leadership.

Note: The maintainership was handed over in Nov 2022, but I felt it was appropriate with an official announcement. My apologies for the delay in making this announcement.

Many dependencies have changed and the project is now built with CMake. If available, please build with GConf2 support enabled so that people can migrate any old alarms they might have, even if they built from source previously. If possible, also add playerctl as an optional/recommended dependency; its presence is detected at runtime.

It was meant to be tagged right before the major rewrite/porting work started, however it was tagged at the wrong commit by accident, and is thus now ignored.

Unfortunately, this project is no longer maintained. If you're interested in maintaining Alarm Clock, please get in touch: joh@pseudoberries.com

Blueprints have not yet been moved. Selected ones may be moved to the wiki in the future.

The Launchpad project is still used for translations.
Launchpad has been configured to automatically import changes from GitHub.

This is a bug fix release:

558559 - Double-clicking on alarm erratically changes alarm time/duration
559514 - The alarms list window should be shown when launching the application
559531 - Remember the alarms list window position
567564 - repeat once: checkbox does not work in gtk+ 2.20
567762 - deleting running alarm doesn't cancel them

This is the first major release since 0.2 and it includes many improvements and bug fixes:

* Alarm Clock has moved to the notification area and can be started as a normal application
* An option to autostart Alarm Clock on log in has been added
* Blink icon when an alarm is triggered
* General User Interface improvements
* Improvements to the alarm list window
* Add sorting of the alarm list
* Notify bubble improvements - remove per-alarm notify bubble settings
* Snooze improvements - global snooze settings, enable snooze for timers
* Add translation support - translations are now done in Launchpad

This release includes some improvements in the autoconf files which will make it easier to include in debian. See the ChangeLog for details.

Fixes bug #261877: All instances of the applet now share the same set of alarms.

This release includes some bugfixes. Debs will be up shortly.

I've just added Alarm Clock to my PPA! The package name is 'alarm-clock-applet'. Add the hardy repository found at https://launchpad.net/~joh/+archive to you sources and install!

This release includes an important bug fix which caused compilation to fail on Gutsy.

See the ChangeLog for more details.

The 0.2 release of marks an important milestone of the Alarm Clock development.

ALARM TYPES
Alarm Clock now distinguishes between two types of alarms: Clocks and Timers. The default type, Clock, will trigger at a specific time of day. The Timer will trigger after a specified amount of hours, minutes and seconds.

REPEATED ALARMS
Alarm Clock will now allow you to specify at what days an alarm (of type clock) should trigger. No need to activate the alarm before you go to sleep any more!

SNOOZE
An alarm or timer can now be snoozed for a specified number of minutes. This only applies for alarms which uses sound notification. Clicking the applet will snooze all running alarms. To clear all alarms, right click the applet and choose "Clear alarms". 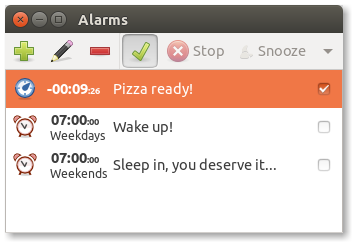 Alarm Clock is easy to use - clicking the panel icon will bring up a list of alarms. From there you can add, edit and delete alarms as well as start, stop and snooze them.

Timers. The Clock will go off at a specific time of day while the Timer will ring after the specified amount of time. 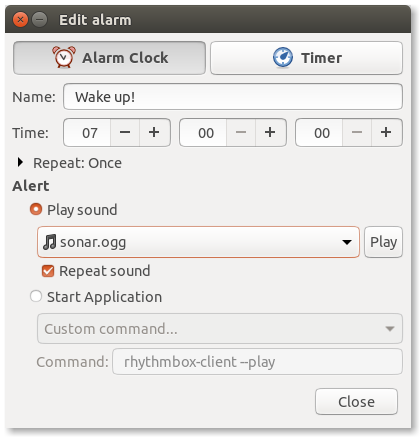 Alarm Clock will notify you of an alarm by either playing a sound or starting your favorite music player! You can of course specify which sound you would like to use and whether it should be repeated or not. It’s also possible to specify a custom command to run instead of the pre-defined media players.

A notification bubble will appear when an alarm goes off, just in case you missed the sound.

Both alarms and timers can be snoozed - it's as easy as selecting the alarm and clicking "Snooze".

For convenience, the right-click menu of the panel icon provides quick access to snoozing and stopping any beeping alarms.

Alarm Clock is powerful and supports multiple alarms as well as auto-repeatable alarms.

Alarm Clock is currently not present in the Ubuntu repositories. To install it, first add the PPA by running the following two commands in a terminal:

Then, you can click the big button below to install!

Yes, I want it!
This will install the alarm-clock-applet package. If the button above does not work, you can also install it using the terminal by running

Alarm Clock can be installed from the AUR.

Please make sure you have first read through the Arch Wiki AUR page, especially the note in the Installing and upgrading packages section.

Any issues opened about errors while loading shared libraries on Arch-based systems will be closed.

(In version 0.2, the project changed name from Alarm Applet to Alarm Clock)

Please check the Requirements section of the README for information regarding dependencies. They're usually in the *-dev or *-devel packages in most distributions.

All the dependencies on a Debian/Ubuntu system can be installed with:

And compile - install with the usual:

Please post any bugs and suggestions to the GitHub issue tracker! If you'd like to see Alarm Clock speak your native tongue, consider helping out with the translations!